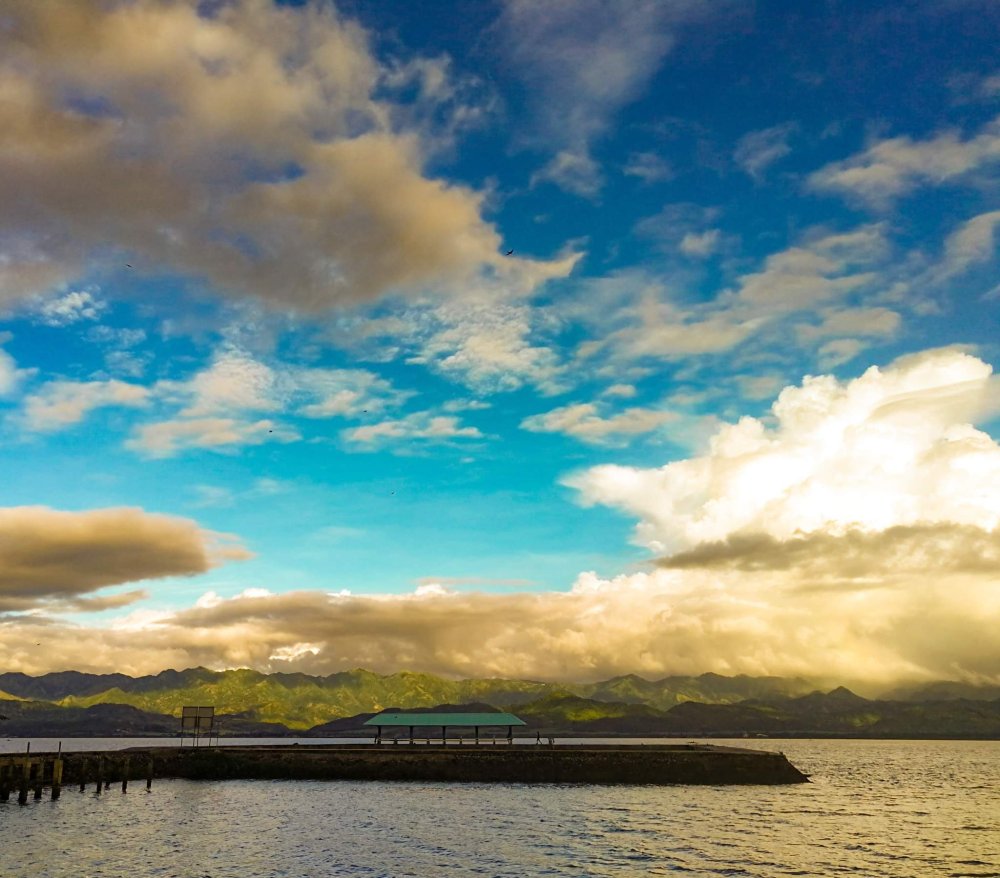 Want to go on a quick getaway from the bustling city life and experience what it feels to live in an island . Go pack your bags and see where it is takes you. Mine took me on an instant get away from the Queen city to a smaller yet progressive city , San Carlos City in Negros. 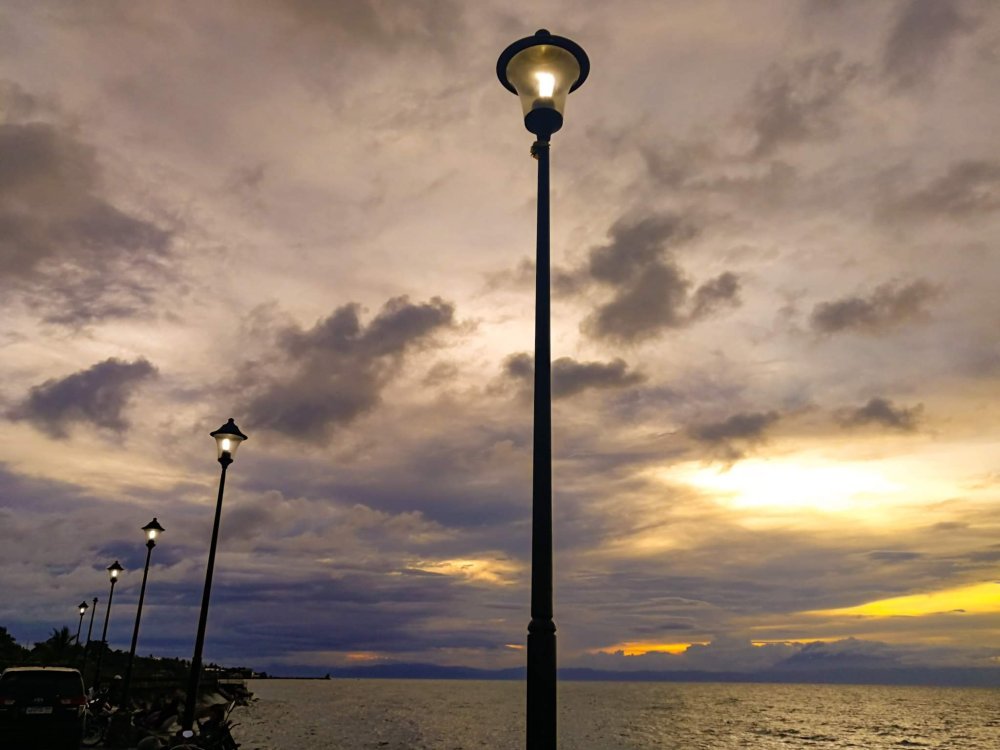 An easier and faster way to go there is through the port of Toledo City . It was a 3 hour bus ride going there . Normally, if go with regular passenger boats ,it can take up to two hours in crossing to the other side , but with the new Fast Cat , it will only take you an hour which would make it much faster and more convenient both to those on business or pleasure trips. And so we discovered that after we boarded the regular passenger boat which took us 2 hours and 15 mins to get to the San Carlos City. It was fun on my part since I get to smoke on the boat while reminiscing memories of the past as the cold winds traversed my whole body.

It was early evening when we arrived . We were tired since we just got off from shift and tried to sleep on the bus going to Toledo and the boat but failed . It was exciting to see the place in a festive mood. There were lights around town and everyone seemed happy.

We had a hearty but pricey dinner and of course some photo ops. We wouldn’t want to let that pass. It rained very hard that with a full stomache, a comfortable couch in Febbie’s Place and one San Mig Light called it a night . 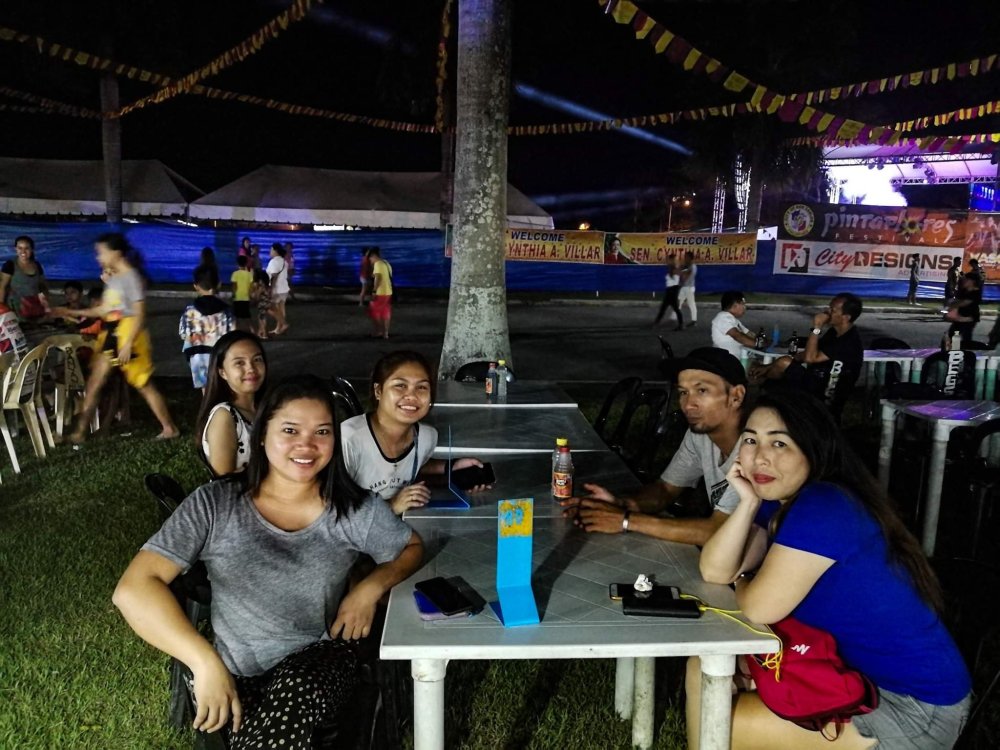 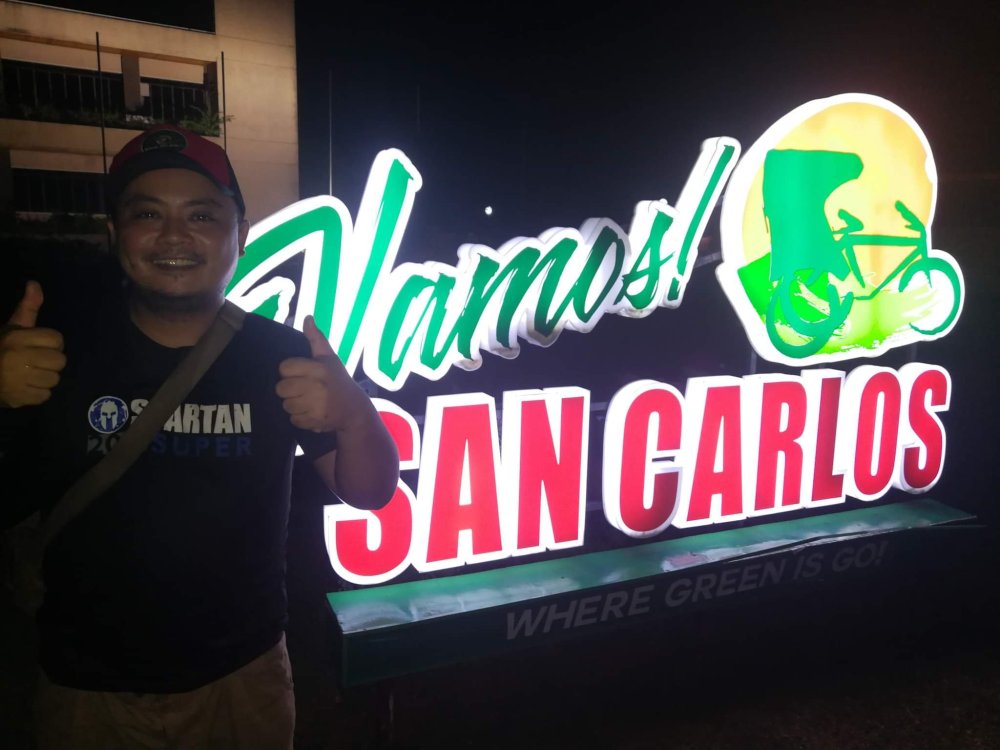 It was but only a few hours of Dreamland that I woke up a minute before my alarm sounded . I was excited to go to the island . Yes I was the first one up and woke everybody. That’s how excited I was . I was the first one to prepare the bags and all but I was not informed that we will still be going to one of the famous peaks in the area which was the Mayana Peak, then drive Mark to the airport in Bacolod then end the day in the island.

It will be one jam packed day I can tell. And so we found ourselves sitting on a bus en route to Bacolod City. We made a few stops along the way and it allowed us to marvel the amazing and gigantic land formations on the island. It was raining still that day the fog added artistry on the beautiful mountains as we traversed the slippery road going to the famous Mayana Peak.

After the Mayana Peak adventure , we hopped on a bus going to Bacolod . Mark was panicking that he may not be able to make it to his flight and we were giving him options on what to do next if ever he missed it. It was a 2 hour bus ride from where we took off. We enjoyed the scenery as we passed by cliffs dropping to as far as a thousand feet. Truly there is still a lot to explore in Negros. As we were nearing Bacolod City, we can see Mt. Kanlaon with all its grandeur and might. It stretches across the land and you would notice that on all those places where the mighty volcano stretched , there were no houses or any buildings at all. It was all but farm lands. Well it’s safe to say that they were just careful since Mt Kanlaon wakes up from time to time . There are 3 Major hikes in the island on Negros and Mt Kanlaon is by far one of the hardest . Apart from that it is very vast, it has its own unique perilous trails that will make you call all the saints .

And so mark made it to his flight , thanks to online check-in. We explored Bacolod for a bit, had lunch and went back on the road to make it to sunset on the island. Our hostess told us that it is magnificent. But due to some road bumps we were not able to make it on time and arrived on the island around past six. It was dark and cold and you could only see a few houses with electricity. We were told that it’s been already weeks that they don’t have any power due to an accident underwater between a boats anchor and the submerged power lines. 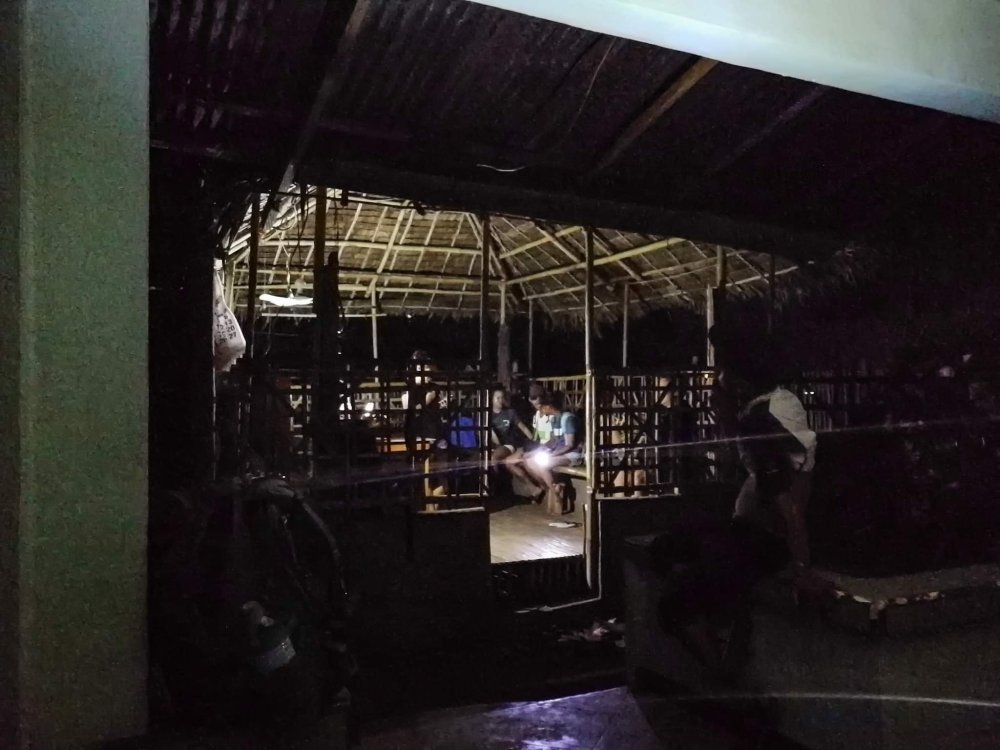 The stars were shining bright as the winds were blowing hard as they could too. We explored the half lit island for a few minutes and had dinner . The group were planning on having a bonfire by the beach but I guess everyone were artist and started drawing it. We called the night early . I slept at the terrace and I could feel the breeze rushing in every direction and it was nice. It was like I was sleeping on the clouds. It was very nice to only hear the hustles of the coconut leaves and the tides from afar as the wind brushes your whole body and accompany you to Dreamland. It was surreal. It was worth it.

We had a few shots and called the night early around 8 in the evening. It was really the island life to its fullest. Morning came and I had one of the best sleep in my life. It was around five oclock in the morning and I can still hear the others enjoying dreamland through a harmonic sound of snoring blended with a few rosters and the waters trying to get to land, it was a like I was transported back in time from way way back when I was still a kid. It was too tempting to go back to bed but I’ve been told that they have Starbucks store on the island, so me and the other two ladies who slept the earliest the night before decided to have a very early morning coffee. And yes, we were not dissapointed, we were the first customer of the day in their local Starbucks. There was a logo of starbucks and yes, the coffee was really from starbucks beans. For only. 15 pesos we were able to get a nice smelling coffee enough to wake ourselves up. Later on the others woke and went to the store and we decided to head off to the beach and explore the beauty of the island. 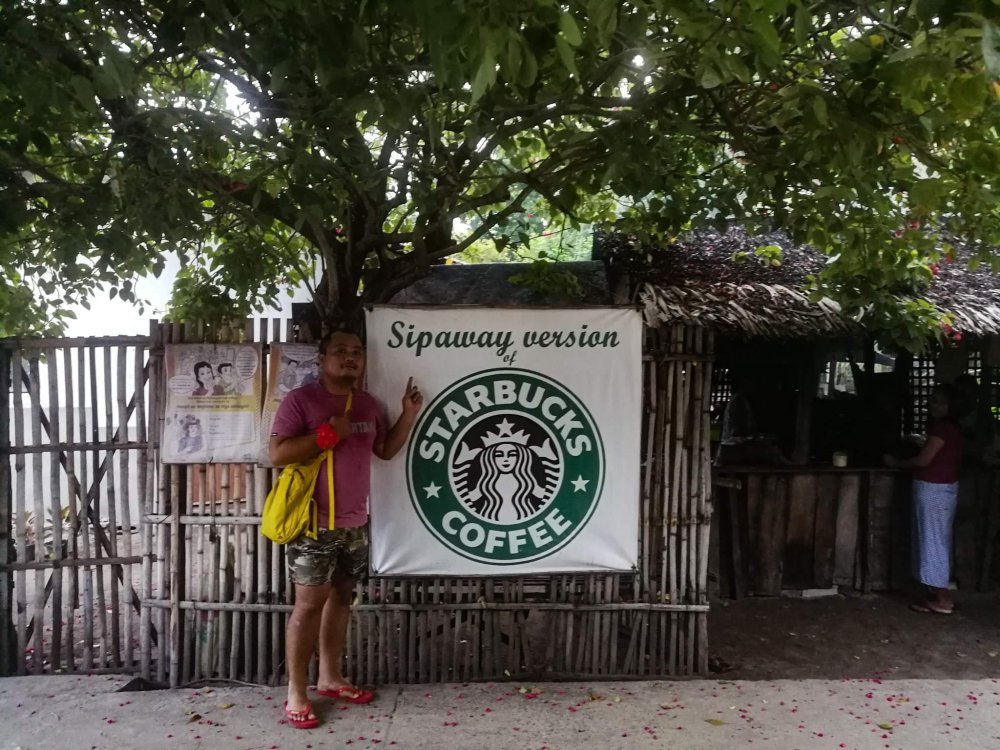 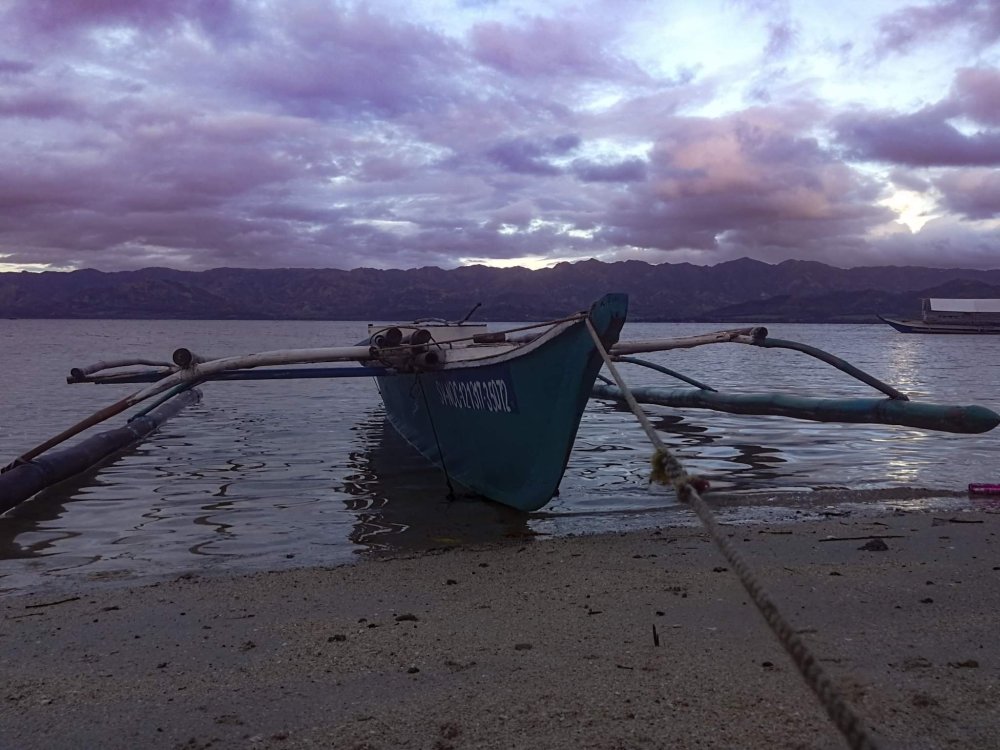 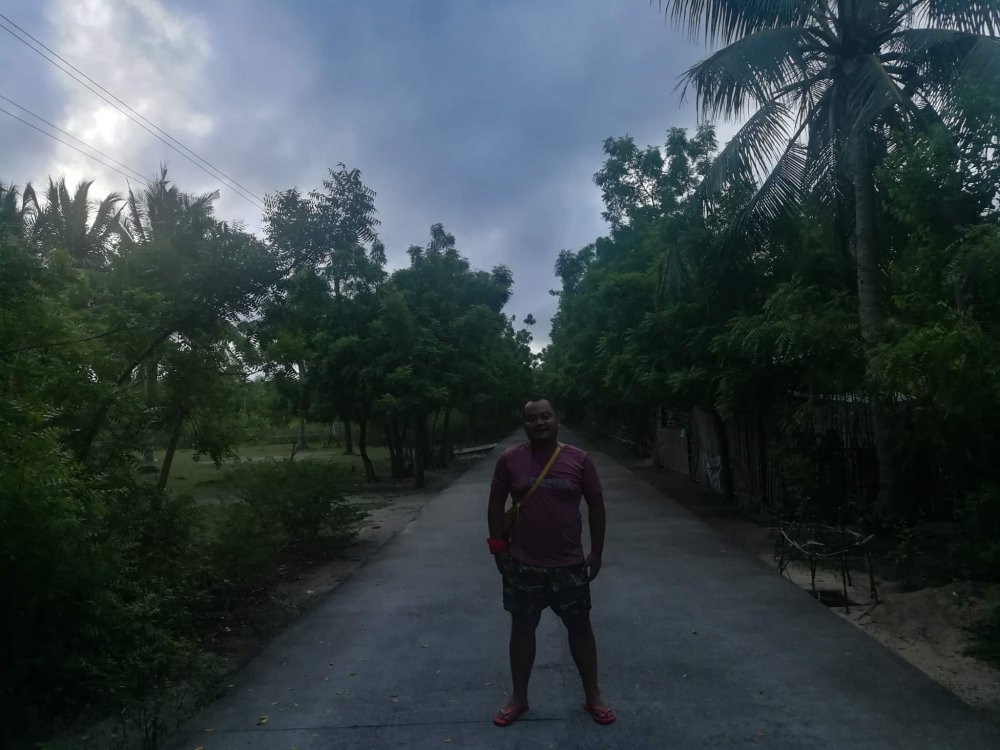 The simplicity of living on the island with an amazing view of the mainland Negros made that morning more than amazing. Just by sitting along the old cemented port would allow you to be connected not only to nature but to your inner self. With only the cold winds the amazing view and the small waves on the shore as your witness, you will be able to really have a one relaxing early morning. A few snaps of photos and we went back to prepare breakfast. 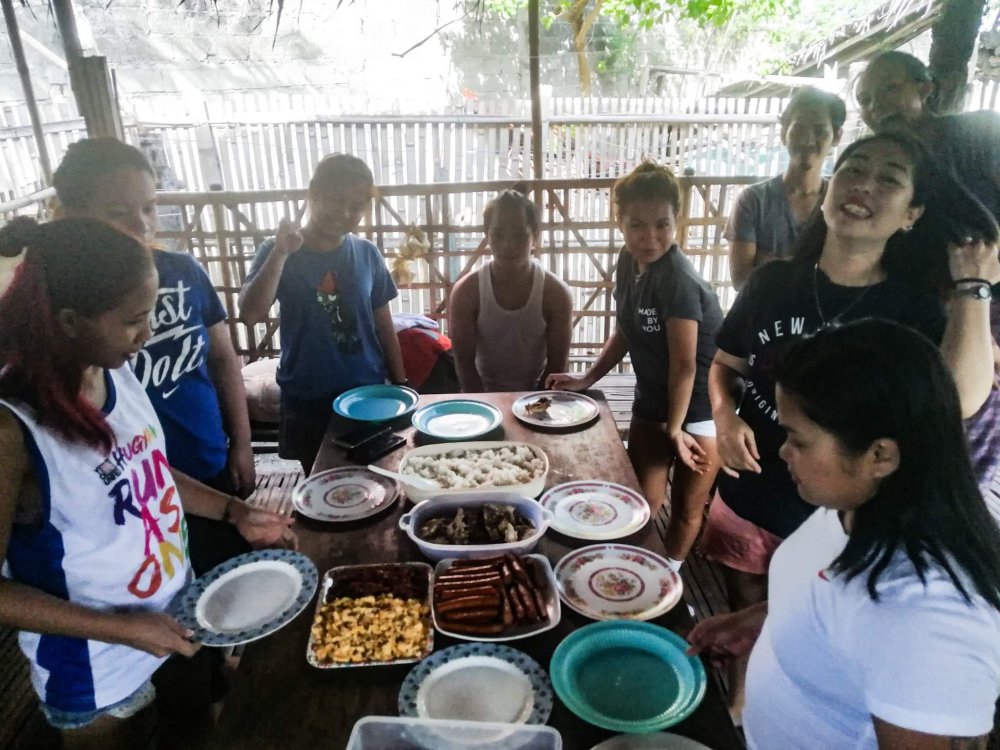 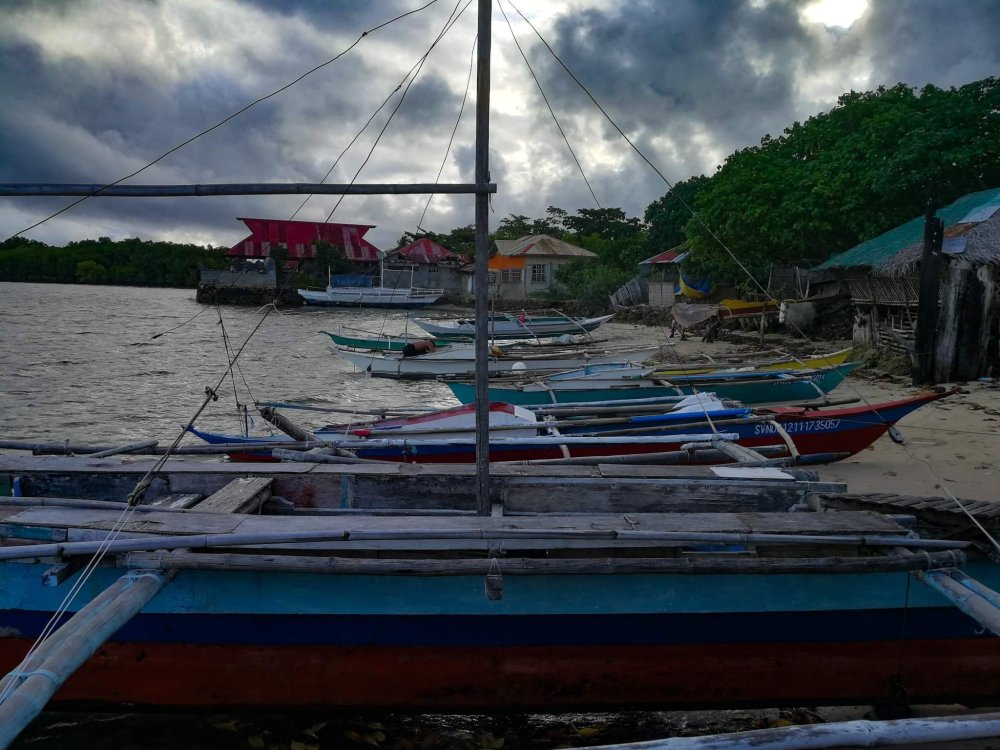 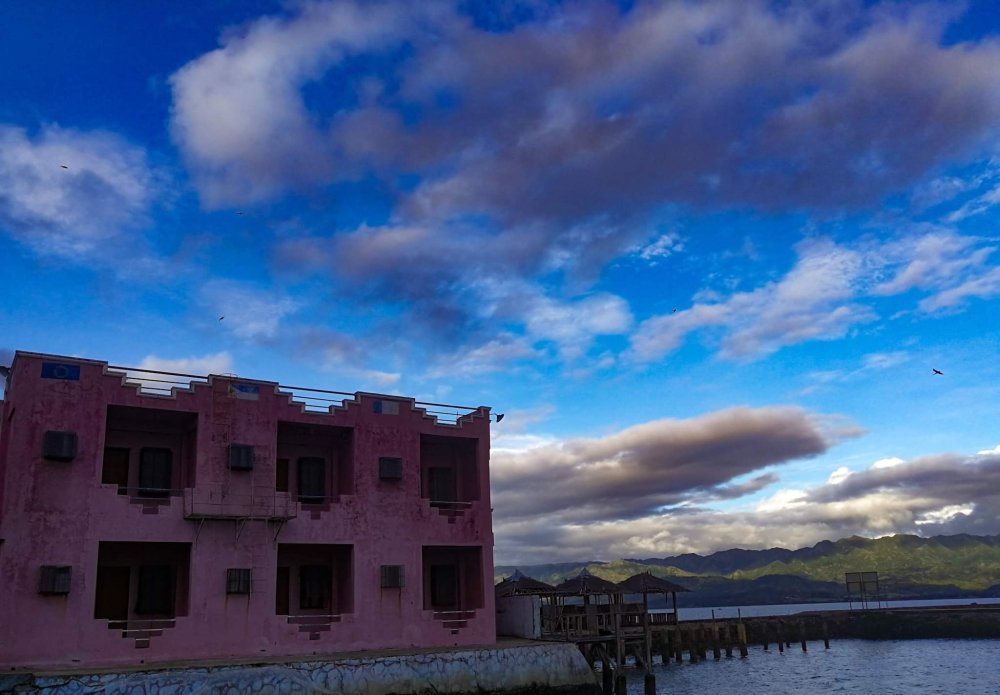 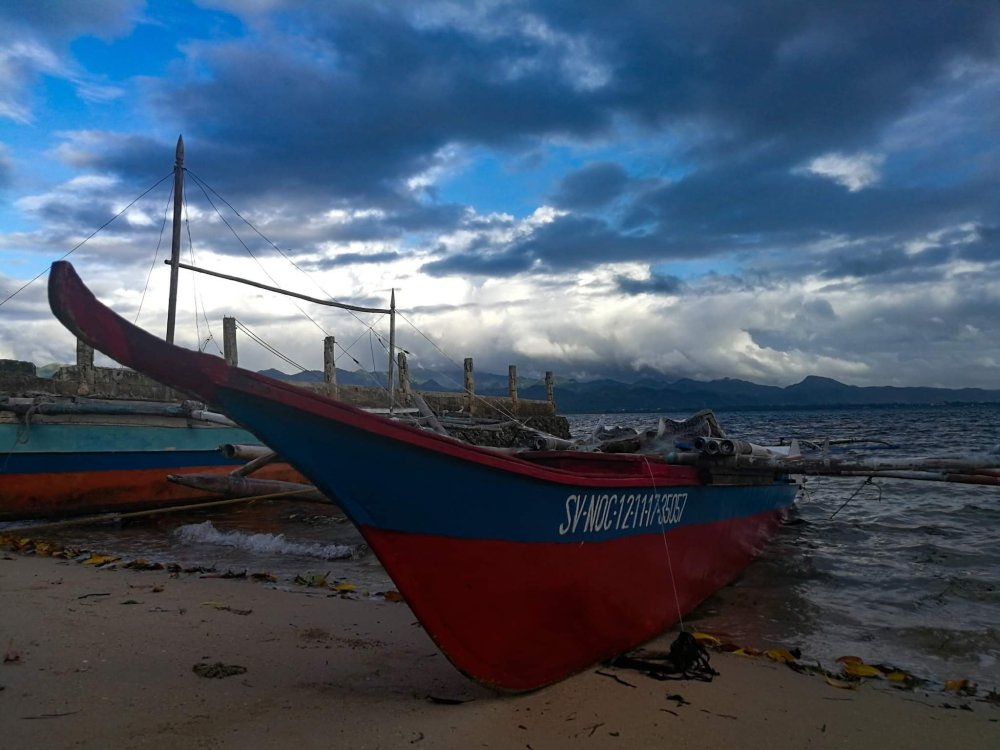 t will still be a long day since we will need to go to the other side of the island for us to enjoy the nice clear waters. We said our goodbyes with our hostess, took some photos and proceeded to our next destination.

We gave ourselves an hour to enjoy the clear and cold waters of the island. It was very soothing to dive and swim on a very clear and deep water. We were swimmimg by the port, the same port that we will be taking off going to the main land. We only took a few photos for we beliebe that we need to be in the moment and not be glued to our phones and camera. 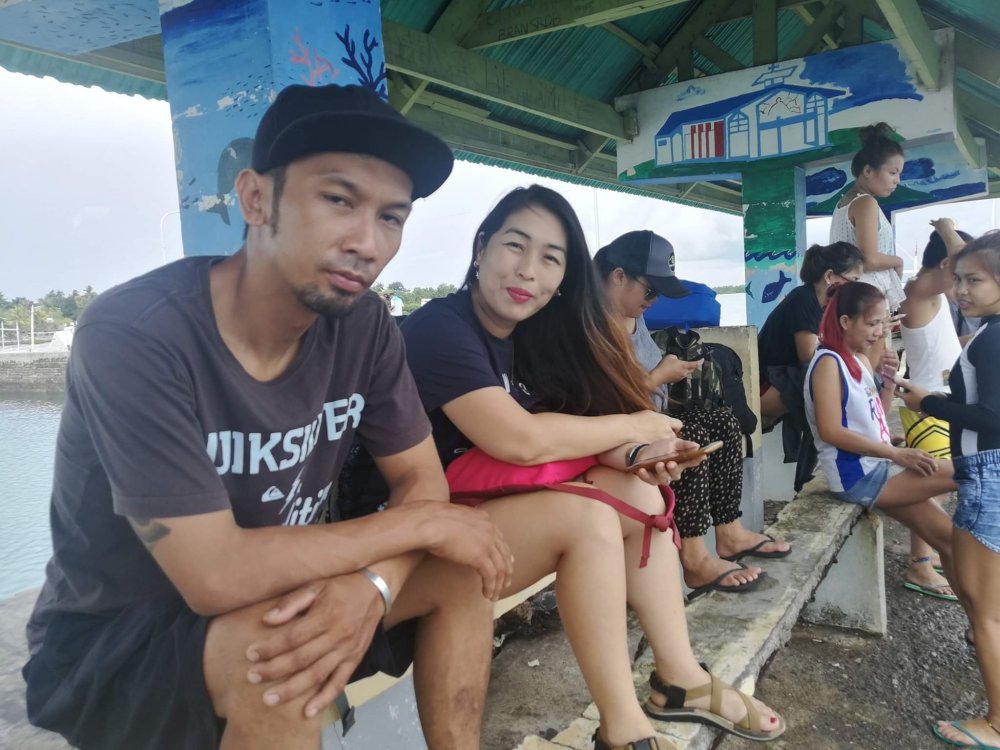 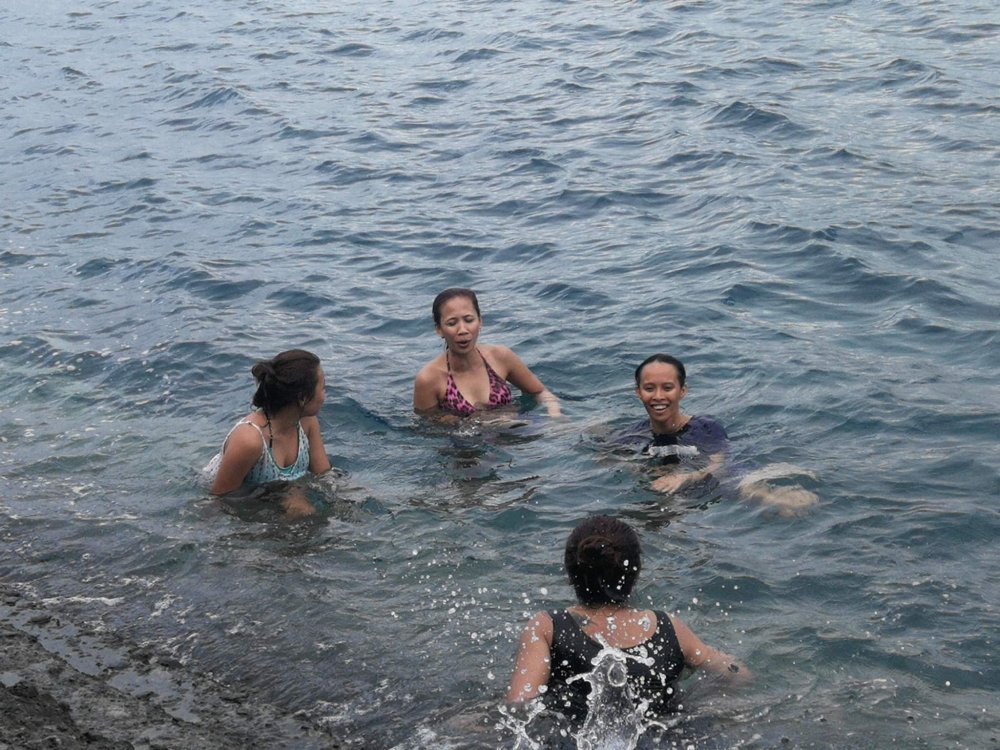 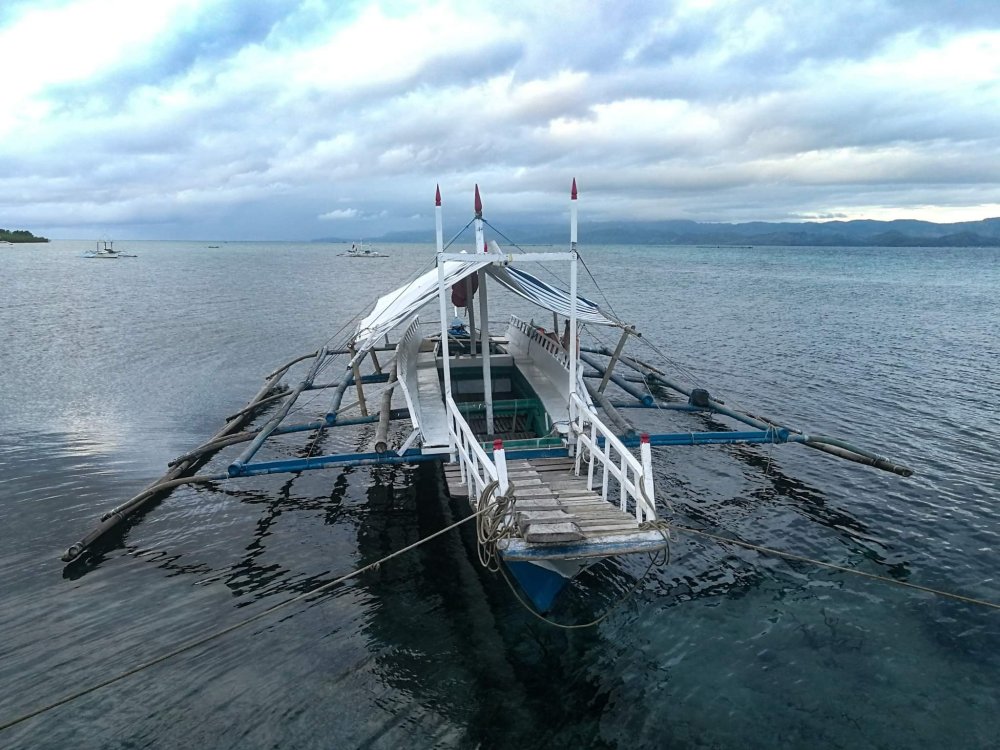 After filling our inner childs craving of swimming and diving on the beach, we took off going to the mainland for us to be able to take a glimpse of the Pintaflores, a festival in San Carlos City which was happening on that day. But that will be on another blog.

How to go to the island.

You can charter a small boat just outside the gate of the main port of San Carlos City.

To enjoy the island life, you have to have a contact there or a friend who lives there since I have noticed that there arent any beach resorts in the area, im not sure on the other parts of the island but the place we stayed was all community.